Through his book, “In the Shadow of the Cross”, former vice-chancellor of Australian Catholic University, Emeritus Professor Greg Craven of The Glenn Institute; the ACU’s public policy think tank is promoting deeper thinking and conversations about important issues confronting Christianity and society.

Host of the event is the Archbishop of Melbourne, The Most Reverend Dr Peter Comensoli.

In opening the conversation, Comensoli said that both Abbott and Rudd are men of faith who have given great service to Australia and in doing so have brought something of the life of the Gospel into their various roles.

No longer prime ministers, both now serve the nation in other ways and this conversation is to hear their views, as people of the Gospel, and how they engage within the life of society in Australia. 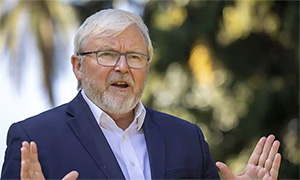 If you’re a person of Christian faith and therefore you are animated by the Gospel then it’s very difficult, and I think improper for us, to simply adopt a form of cafeteria Christianity; a smorgasbord Christianity where we just pick and choose.

Of course, if you want to anchor this in a core piece the New Testament it is simply the great commandment to love the Lord your God with all your heart and the soul and your strength, and love your neighbour as yourself; and on these two things hang all the law and the prophets.

For those reasons, for me, it has always been an inseparable question that if you are engaged in a spiritual relationship with your understanding of God on the one hand that it cannot be clinically separated from your responsibilities to your fellow human beings

Not just those physically next door, not just those who happen to be in the same town that you grew up in, not just those folks that you know or may form part of what modern society describes as the nation-state but in fact the tradition of Caritas and Catholic Care;  regardless of whether we know these people personally or not.

The final thing I’d say is there is a debate, often in the public political process, about whether this responsibility for our fellow human beings; our brothers and sisters, whether that is a discretionary individual decision; that is an act of private charitable choice, or whether it is a responsibility through society acting through the common agency of politics to help look after our fellow human beings by that way through the proper provisioning. 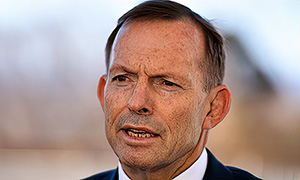 Obviously, I take religion seriously, although I don’t claim to be a particularly good Catholic.

But, I think the main job of religion is not to make us perfect but to make us better and obviously as better people we will bring something of that to public life.

I look at the public life that I’ve been part of, that there are lots of people in our public life who take their faith seriously and they cover a very broad political spectrum.

I think anything between the hard green left and the ultra-libertarian right is fertile ground for Christians.

So I think that the main role of the church when it comes to public life is encouraging more good people to go into public life encouraging people to be the best they possibly can be, but leaving the detail of policy whether we prefer more government or less government any particular situation, whether we think that there should be a greater focus on this issue or that issue in any particular situation

I think the what and how of any is best left to the people in public life rather than to be pontificated upon from the outside.